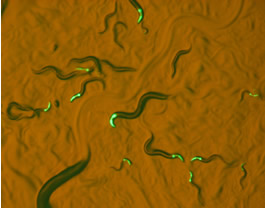 Our research brings the superb experimental power of Caenorhabditis to investigate the genetic basis of reproductive isolation in unprecedented ways. We are exploring this at several levels, from pre-mating factors like the evolution of male responses to mating pheromone to post-mating pre-zygotic factors implicating gametic isolating barriers to post-zygotic incompatibilities that cause inviability and sterility in hybrids. Using powerful tools, including inter-species NIL mapping, in vivo sperm labeling, and genome editing, we are dissecting the mechanistic and genetic causes of these barriers to gene flow. We are especially interested in integrating the genetics of speciation with the development over ontogeny to connect evo-devo and speciation genetics.